As the world’s largest producer of single wall carbon nanotubes (SWCNTs), OCSiAl is taking the lead in raising transparency of the nature of nanotubes and their responsible handling. The company has an ongoing policy of initiating its own as well as external independent testing and research, and it has already accumulated a significant knowledge base on the morphology of TUBALL™ nanotubes, and on their safe handling and use in the workplace. TUBALL™ is compliant with all the relevant international, national and regional requirements of the world’s key markets, including the EU and the USA.

TUBALL™ carbon nanotubes are extremely thin single-layer rolled-up sheets of graphene that are more than 5 µm in length and have a diameter of 1.6 (±0.4) nm. They have a number of exceptional characteristics, such as superior electrical conductivity, strength, and temperature and chemical stability. TUBALL™ nanotubes have high flexibility and consequently, they have a number of completely different features in terms of health & safety and environmental considerations.

According to the German Federal Institute for Occupational Safety and Health (BAuA), SWCNTs have an elastic (Young’s) modulus that is about 3 times higher than that of multi wall carbon nanotubes (MWCNTs). Their diameter of 1.6 (±0.4) nm is, however, at least 5–10 times smaller than that of MWCNTs, which have a diameter of 9–18 nm. Compared with MWCNTs, SWCNTs are therefore extremely flexible and have nothing like the rigidity of MWCNTs with different sizes.

This extreme flexibility, which is clearly visible on a transmission electron microscope (TEM) analysis, together with their propensity to reduce surface energy, means that SWCNTs tend to spontaneously form bundles or agglomerates.

Therefore, TUBALL™ nanotubes cannot be made respirable and show no rigidity.

According to the International Agency for Research on Cancer (IARC), TUBALL™ nanotubes are classified as Group 3, i.e. substances that are “unclassifiable as to carcinogenicity in humans”.

HANDLING AND PROCESSING OF TUBALL™ NANOTUBES

In May 2018, OCSiAl conducted a number of case studies in the workplace to measure workers’ possible inhalation exposure to nanoparticles. These case studies on TUBALL™ nanotubes showed that the amount of nanotubes released during field-test sampling was well below the NIOSH REL of 1 µg/m3 8h TWA (< 5% NIOSH REL). In the specific case studies on the handling and processing of some TUBALL™-containing mixtures or during their production, no free-standing nanotubes were observed.

UTILISATION OF MATERIALS AUGMENTED WITH TUBALL™

In nanoaugmented products, the nanotubes are normally embedded into a matrix so there is no risk of them being exposed (various polymer nanocomposites with TUBALL™ were tested, such as HDPE, epoxy and natural elastomer). In 2017, VITO, a leading European independent research and technology institute, conducted exposure monitoring studies during various operations (including cutting, grinding, sanding and drilling). The tests on pure polymer samples and on TUBALL™-augmented epoxy, polyethylene and elastomer materials were carried out inside a test chamber so that any aerosol release could be captured and measured with a TEM. These tests confirmed the absence of free-standing or protruding nanotubes.

OCSiAl is continuing its responsible approach to health & safety and environmental issues by bringing its products in line with global standards and specific international, national and regional requirements.

OCSiAl was the first and currently remains the only company to be authorized to undertake large-volume commercial shipments and marketing of SWCNTs in Europe, North America and other key global markets. TUBALL™ SWCNTs are the first to be registered in accordance with the EU’s REACH (Registration, Evaluation, Authorisation and Restriction of Chemicals) regulations: in September 2016, TUBALL™ nanotubes were registered under the number 01-2120130006-75-0000. With the tonnage band upgrade, which is compliant with REACH Annex VIII, as of April 2020, OCSIAl has increased its allowed commercialization volumes in Europe up to 100 tonnes of nanotubes annually.

TUBALL™ is regulated as a new chemical substance by the US EPA. In 2019, OCSiAl’s regulatory status with the EPA took a major step forward with the publication of a SNUR in the Federal Register covering OCSiAl’s products, which authorizes unlimited nanotube sales up and down the supply chain in the USA.

The company’s near-term plans include scaling-up the permitted volume of industrial commercialization of graphene nanotubes in a number of countries, including Australia and Canada.

The company is continuing with the registration of TUBALL™ nanotubes around the world.

OCSiAl can deliver on a frequent basis various statements of compliance for TUBALL™ nanotubes and for any TUBALL™-containing products. Most statements are valid for a short period depending on the regulation update(s) or specific requirements from the industry. For example, confirmation letters of compliance, available upon request, include the RoHS, SVHC, GADSL, PAH, WGK, Halogen-free, VOC, Global chemical inventory and many more.

TUBALL™ is regulated as a new chemical substance by the US EPA. In 2019, OCSiAl’s regulatory status with the EPA took a major step forward with the publication of a SNUR in the Federal Register covering OCSiAl’s products, which authorizes unlimited nanotube sales up and down the supply chain in the USA. 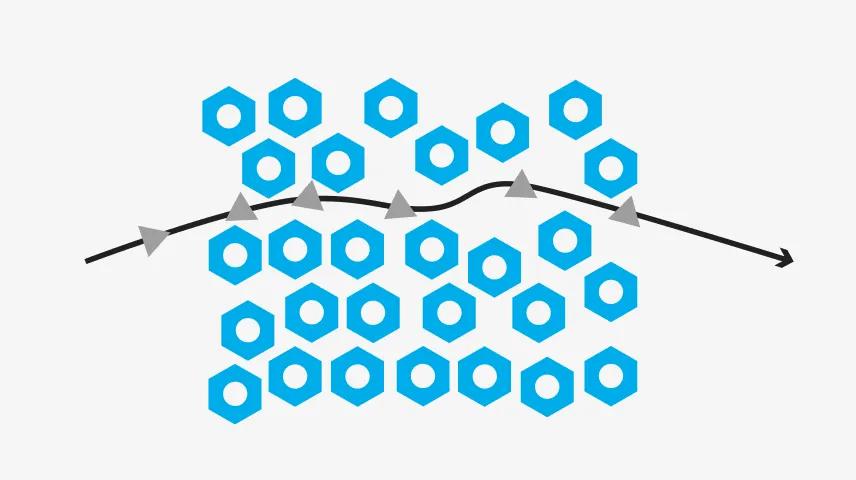 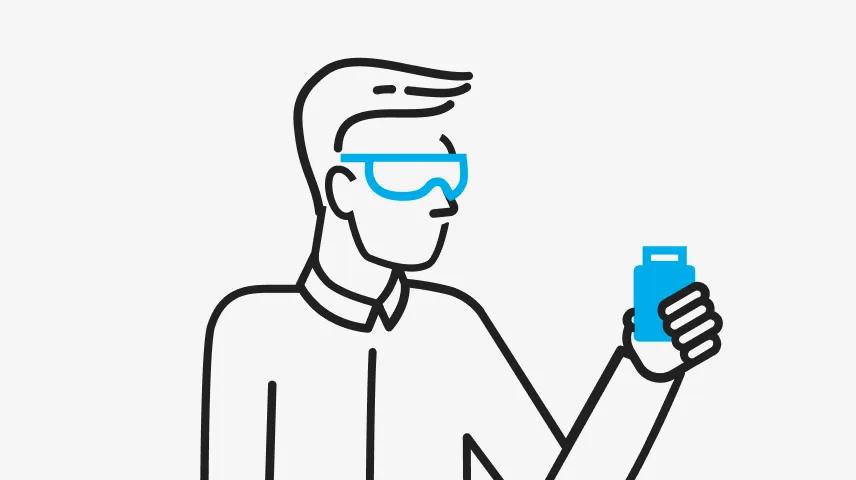 Safe Handling and Use of TUBALL
pdf
2.90 MB
Download 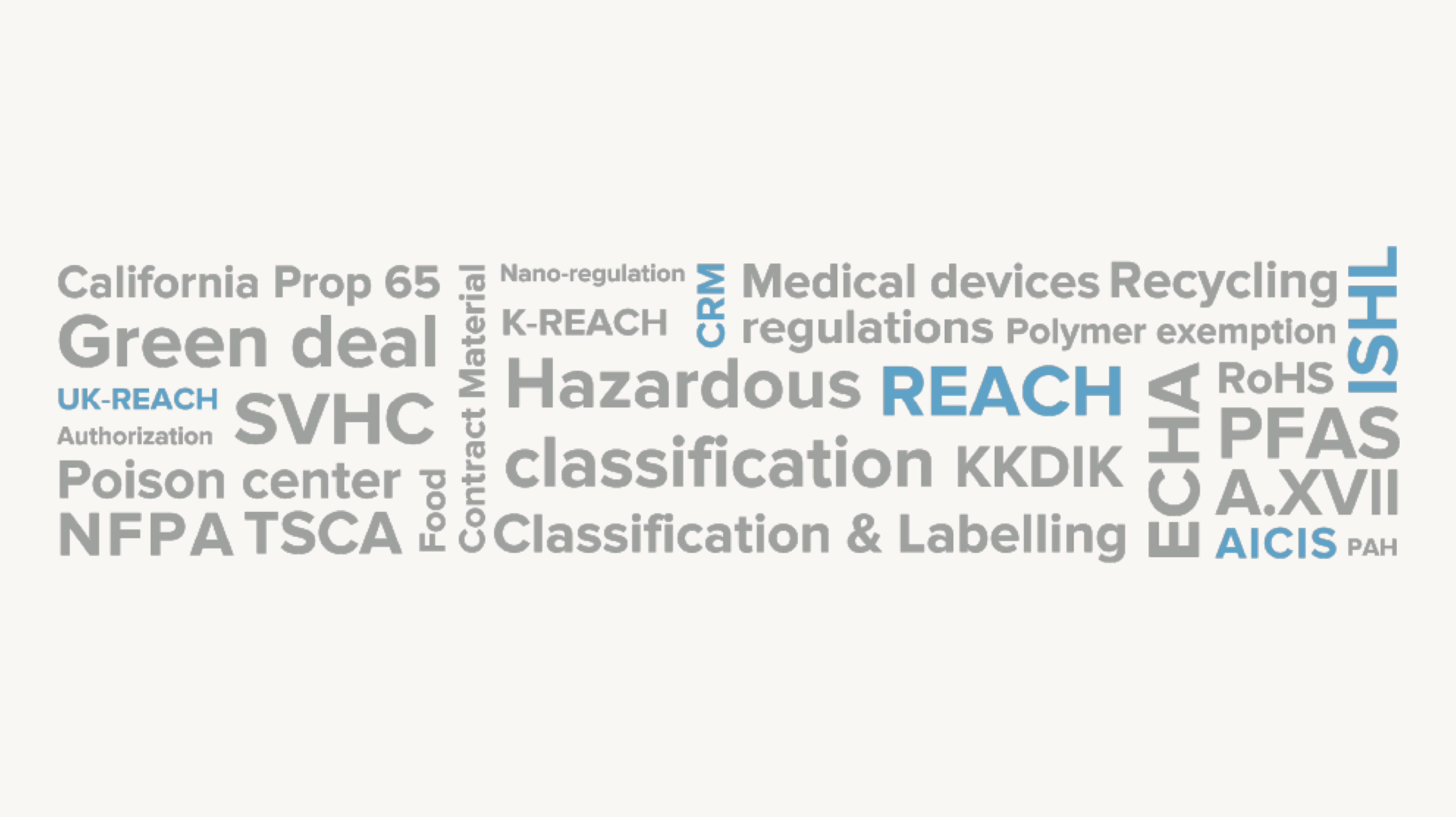 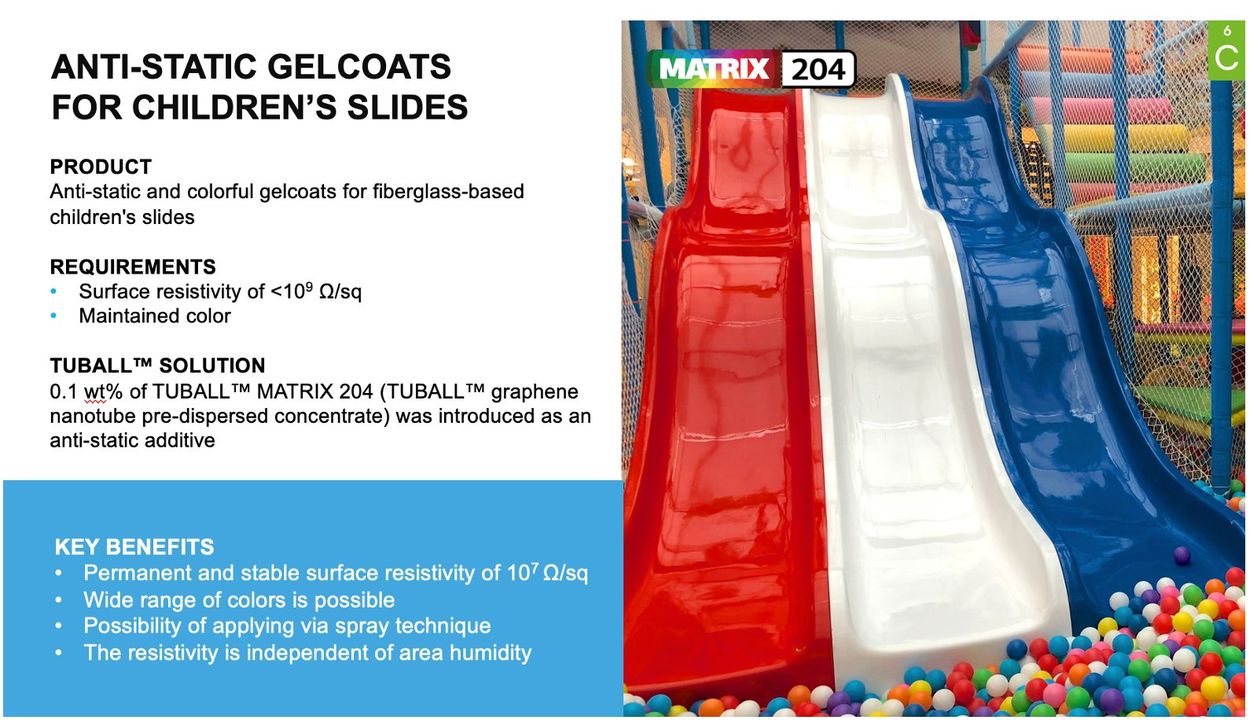 When sliding, a child builds up a charge of 25,000 volts! Graphene nanotubes can protect your child from discomfort. How? They create a conductive network inside the #plastic, turning it into conductor. Now the electrons can pass through the slide with no harm or discomfort for the child. Learn more on graphene nanotubes for gelcoats: https://tuball.com/nanotubes-for/gelcoats-moldcoats?utm_source=Facebook&utm_campaign=Case+children+slide #gelcoats #coatings
Read on Facebook 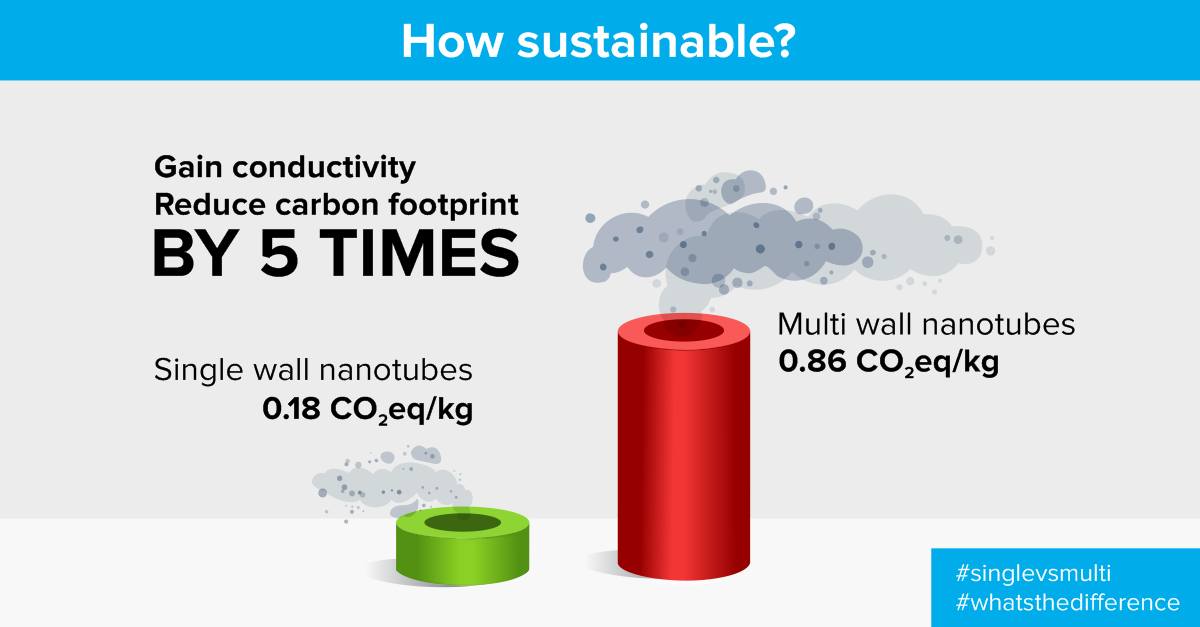 To turn a material into a conductive product, a manufacturer often has to accept the need to increase the product’s carbon footprint by more than 40%. Is it possible to take a sustainable approach in this case? Yes! Single wall carbon nanotubes make it possible to reduce the carbon footprint increase, gained from adding conductive properties to the product, to just less than 10%. OCSiAl’s TUBALL are the only mass-produced and cost-efficient single wall carbon nanotubes. Learn more: https://tuball.com/about-tuball?utm_source=Facebook&utm_campaign=SWCNT+vs+MWCNT+banner+%233 #carbonfootprint #sustainability #conductivity #knowthedifference
Read on Facebook 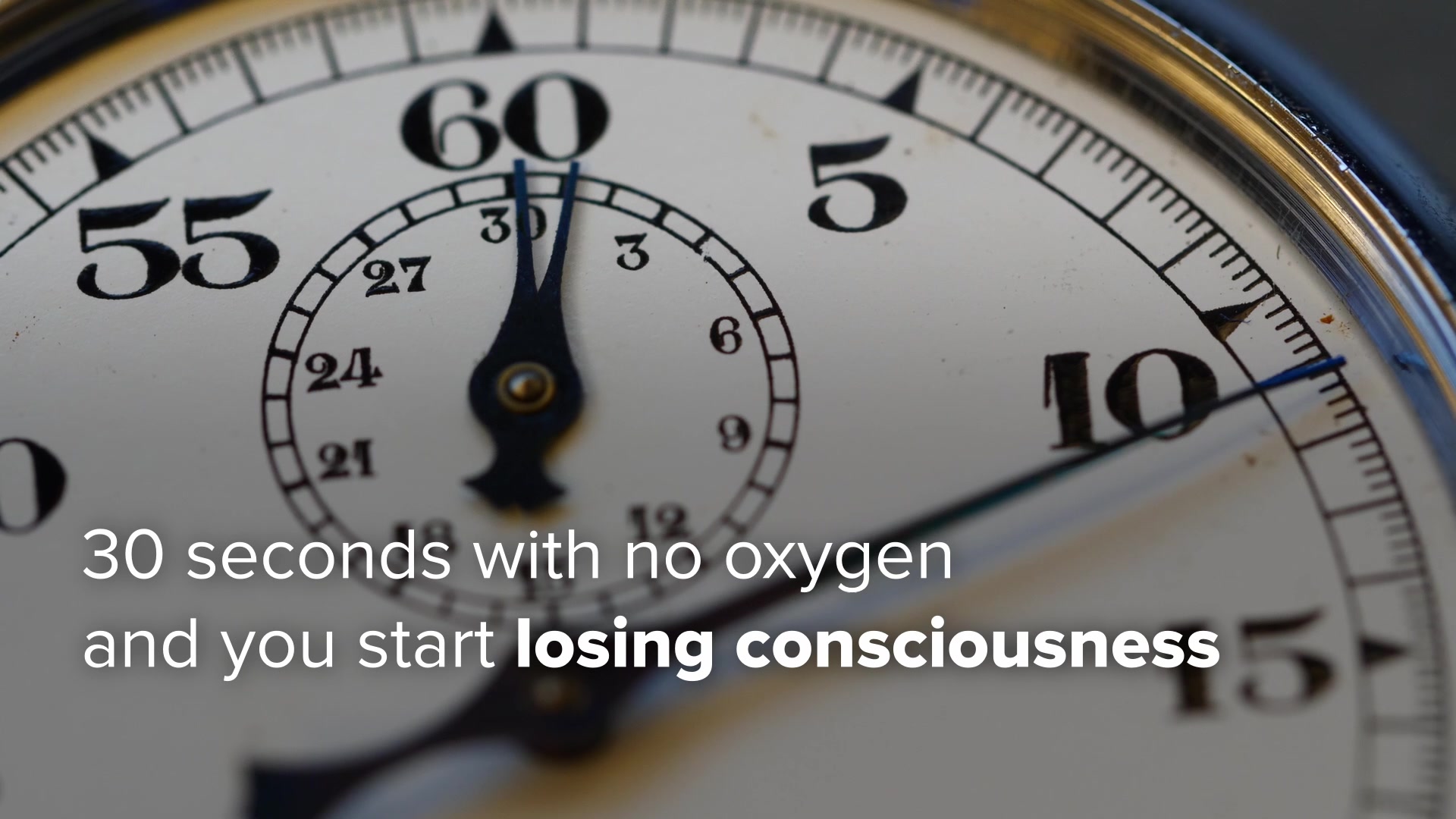 In critical situations, the weight of #firefighting equipment is vital. High temperatures, thick smoke, and a lack of oxygen leave no option for delay. Graphene nanotubes allow firefighters to save lives faster. How? They create a skeleton inside composite material allowing manufacturers to reduce compressed air breathing cylinder weight by 15%. Learn more on how to improve your composites: https://tuball.com/nanotubes-for/conductive-composites?utm_source=Facebook&utm_campaign=Gas+cylinders+video_VV #composites #SCBA #compressedairsystem
Read on Facebook 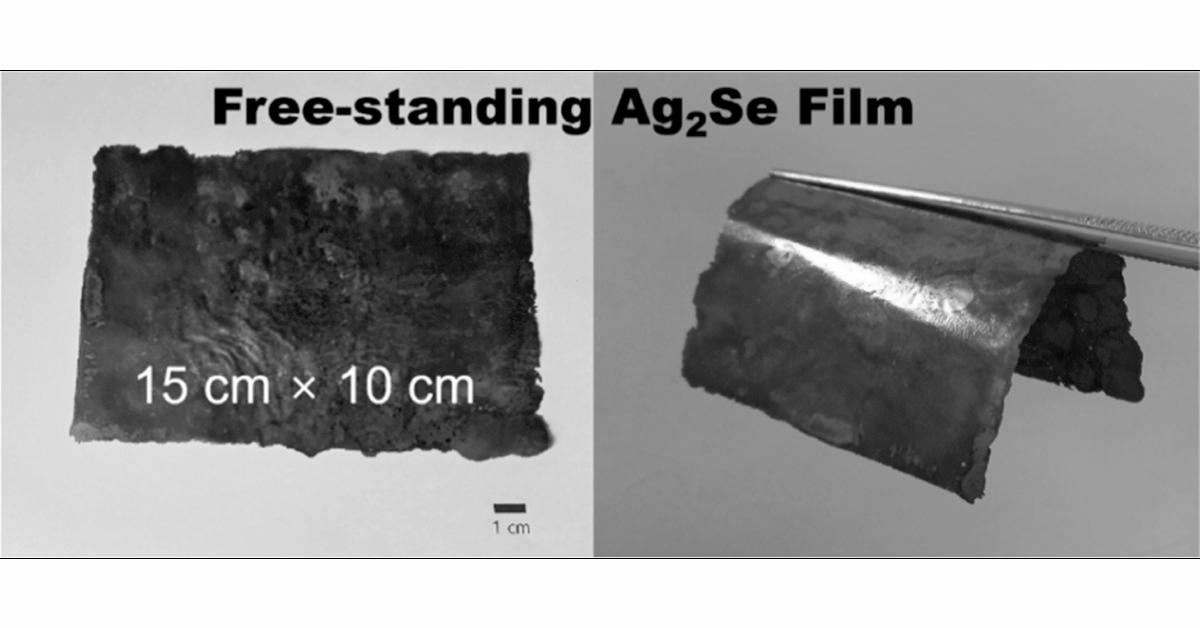 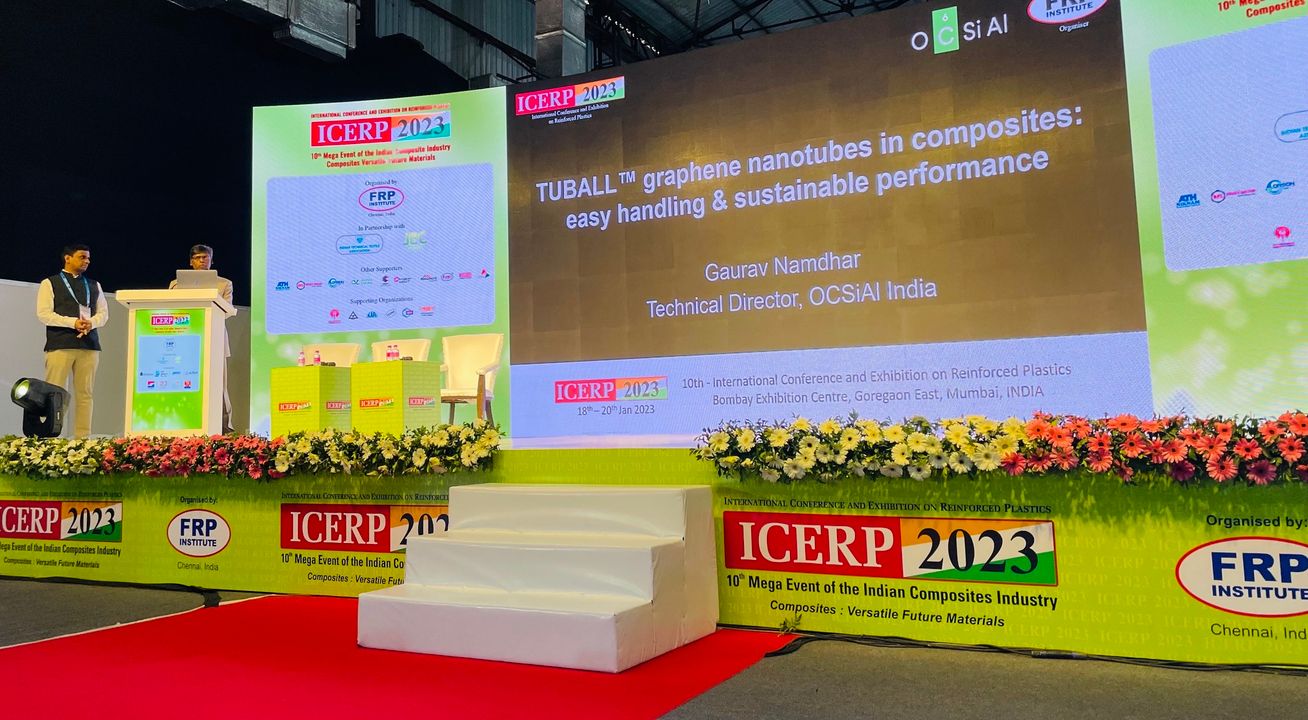